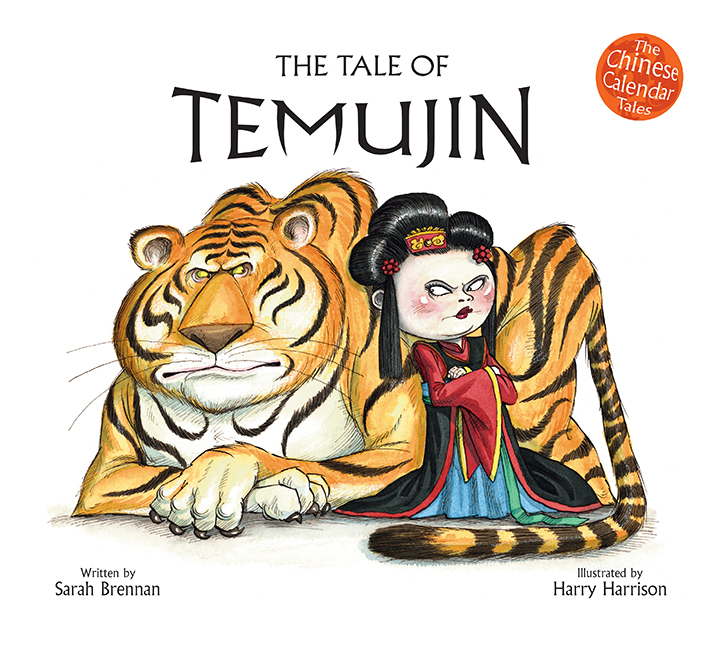 The Tale of Temujin

Temujin the Tiger is the Terror of the East. He’s wrought a trail of destruction and fine dining from Mongolia right up to the gates of the Grand Imperial Palace in Beijing! But Princess Precious is pretty awful as well, with a talent for tantrums and an ear-piercing scream! Watch what happens when two irresistible forces collide in this hilarious rhyming tale for kids of all ages!

Features Genghis Khan and the Imperial Palace in Beijing.

“Sarah Brennan has taken Asian history and given it an unexpected twist – the great Genghis Khan is represented as a ferocious tiger! Brennan’s rapid rhymes will delight and charm readers of all ages while Harry Harrison’s illustrations are as fresh and entertaining as always.” Susan Ramsay, Editor, Young Post, South China Morning Post

“Make way for Precious and Temujin, two of the most thunderous members of Brennan’s Calendar tales family! This is another fine addition to the series, with Harrison providing his every-exciting, fittingly ferocious illustrations as always.” Berwin Song, Arts and Entertainment Editor, That’s Shanghai

There are no reviews yet.

Only logged in customers who have purchased this product may leave a review.

Our books are funny, fabulous, and designed to get kids learning while they laugh! On this website, you can buy our beautiful books online from just about anywhere in the world, stay up to date, or simply get in touch! Enjoy exploring our site with the links!

Which Animal of the Chinese Zodiac are You?

The Chinese Calendar Tales make fantastic gifts, and not just because they are funny and fabulous!

Every single member of your family, and all your friends, have a Chinese Zodiac sign! So the Chinese Calendar Tales make great novelty gifts for pregnant mums, newborn babies, christenings, birthdays and just about any celebration – and not just for kids! Go on…tell your husband he’s a Rat in the nicest possible way! Or a Tiger! Or a Rabbit! It all depends on his year of birth!

Go to Sarah Brennan’s blog to find out which books you should buy for your favourite people, and to read more about them! Please be careful if their birthdate falls in January or February!